From 1957 to 1960 Bert de Némethy’s first core U.S. Show Jumping Team consisted of Bill Steinkraus, George Morris, Frank Chapot & Hugh Wiley. During this period, Gordon Wright, one of the founding fathers of modern riding and the forward seat, documented on film these legendary riders and their incredible horses. Take a look back at this amazing original footage (over 50 years old) as our team competes in New York, Chicago, Dublin and Aachen.

EquestrianCoach.com put together this video for the Show Jumping Hall of Fame where it plays in their museum in Kentucky. 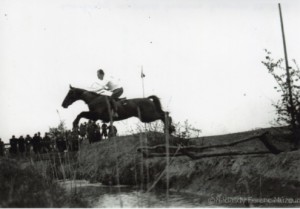 Bertalan de Némethy (Feb. 24, 1911 – Jan. 16, 2002) was a cavalry officer in Hungary and later became the show jumping coach for the US Equestrian Team. Additionally, he was extremely influential in developing many of the riding and training methods used by show jumpers today.

De Némethy began riding as a child in Gyor, Hungary. He began competing in show jumping in his teens. Due to his uncle’s employment as a cavalry officer, de Némethy attended the Military Academy of Ludovica, in Budapest. He then entered the cavalry, riding six horses each day at the school, beginning with dressage horses, before having a lesson on the longe without stirrups, and then riding young horses cross-country. In 1937 he became an instructor. He was sent to train at the German cavalry school in Hanover, the first Hungarian officer to do so. There he was taught by the likes of Otto Lörke, Fritz Stecken, and Bubi Günther, and learned the German system of training horses.

World War II forced de Némethy to return to Hungary, but as the Russian Army approached Budapest, he and his fellow cadets decided to flee, they went to Denmark. De Némethy remained in Copenhagen for six years, employed as a riding instructor. In 1952 he emigrated to USA, where he began teaching and designed jumping courses for various horse shows. In 1955, on the advice of William Steinkraus and Arthur McCashin, de Némethy was asked by the US Equestrian Team to become the coach for the jumping team. De Némethy accepted the position, holding it until 1980. During this time he trained famous riders like George Morris, Joe Fargis, Frank Chapot, Kathy Kusner, Leslie Burr, Conrad Homfeld, Michael Matz, Melanie Smith, Neal Shapiro, and William Steinkraus.

He based his training on dressage work, jumping grids, and longeing, all of which was published in his classic book The de Némethy Method. While he was their coach, the US Show Jumping Team won the team silver at the 1960 and 1972 Olympics, the 1968 individual gold, and the 1972 individual bronze. Additionally, all four riders on the 1984 gold medal-winning team had been trained by de Némethy.

After coaching the US Team, de Némethy was much sought-after as a course designer. He was inducted into the Show Jumping Hall of Fame in 1987.

As a special treat, in honor of Bert de Némethy, we have a free video topic for you to watch. In this topic Bernie introduces us to a modern system of incorporating cavallettis with fences that was developed and perfected by de Némethy. Bernie was privileged to learn this system personally from Bert.

A Look Back at the American Jumping Derby

Here is a priceless look back at some archival footage filmed by Gordon Wright & narrated by George Morris of Mason Phelps’ the American Jumping Derby. This challenging and rugged derby brought the grit of European show jumping to the U.S. courtesy of Mr. Phelps. Held at his stunning family estate in Rhode Island, the Derby was truly a gem of the show jumping circuit from 1976 through 1988.

History of the American Hunter/Jumper Forward Riding System. Featuring vintage footage of the Italian Cavalry in 1929 and a look at the masters who have had a profound influence on forward riding in America and throughout the world.

Evolution of the Water Jump

You're going to be amazed by this vintage footage of the water jump in the 1936 Olympic Games, where it's believed that the first deep water obstacle was introduced in Olympic equestrian sport. It looks more like a swimming competition than a jumping one!