Lately we’ve been sharing several new video tutorials on EquestrianCoach.com on the subject of releases.  In addition to some of the past topics that I have filmed on the subject, other guest coaches including Missy Clark, Cynthia Hankins, James Hagman, Karen Healey and George Morris have also participated with their video topics. All of us not only share the same philosophy on the subject, but we also have the common goal of spreading more awareness of its importance and especially when the timing is right, developing the following arm, or Automatic Release as it’s called today.

To utilize the following arm well, the rider’s arms have to be totally independent from their seat. Basically this means one does not have to rely on the neck with some form of crest release to support their upper body. Of course this takes a lot of practice on the flat with daily exercises such as two point in the trot, riding without stirrups, posting without stirrups, and developing elastic contact with the mouth that follows the balancing gestures of the neck in the walk, canter and gallop. 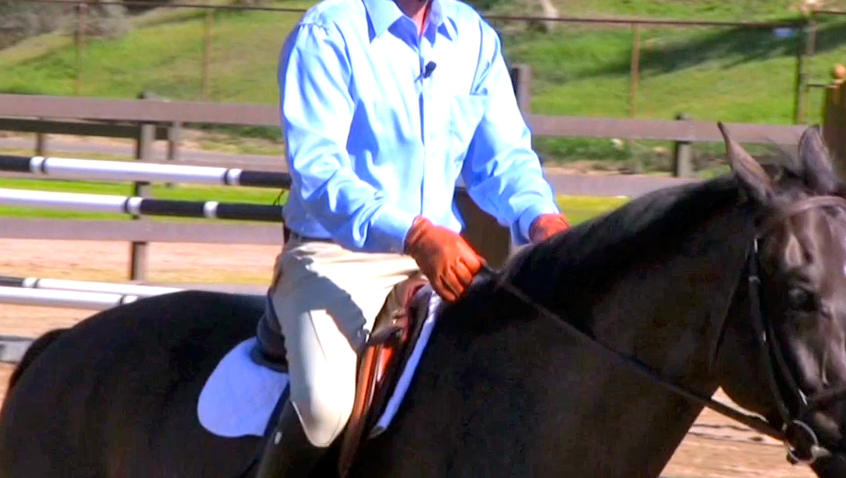 Once a rider has mastered a good base of support on the flat and especially over fences, and doesn’t have to rely on balancing on the neck with a crest release, you can begin experimenting with this artistic following arm. Don’t think that you have to wait years to begin this process. It requires balance and strength to become independent through exercises and some riders can achieve this even at an intermediate level. This security is extremely important to protect against the abuse of the horse’s mouth and back.  When first teaching this I like holding the reins between your thumb and first finger, a Driving Rein, to lighten the contact, should you make a mistake. 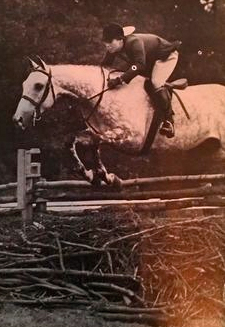 One only has to go on Facebook to see all the wonderful posts picturing riders from the middle of the last century and notice how many of them are independent of the neck with soft following arms that maintain the light contact with the horse’s mouth. This was the norm and was taught by all riding instructors prior to the 1970’s and they introduced it to their students sooner rather than later!  But somehow Americans found an easy way out of  having to practice with the drills mentioned above, finding it easier to simply balance on that big, beautiful neck. 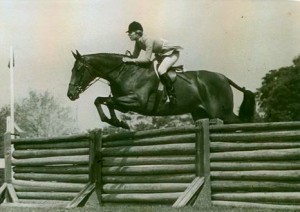 Terry Rudd & Spindletop Show Down at the Oxridge

Another contributing factor was the influx of warmbloods who perhaps were more forgiving for the loss of contact over the jump than were the Thoroughbreds. Focus was turned to the neck and, like George said, they never read his last chapter on the Automatic Release, the most advanced release.

So for four decades now, a trend has developed encouraging reliance on the neck. In the hunter division forty years ago riders mainly used a proper, esthetic short crest release or a following arm. 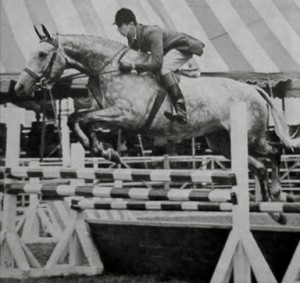 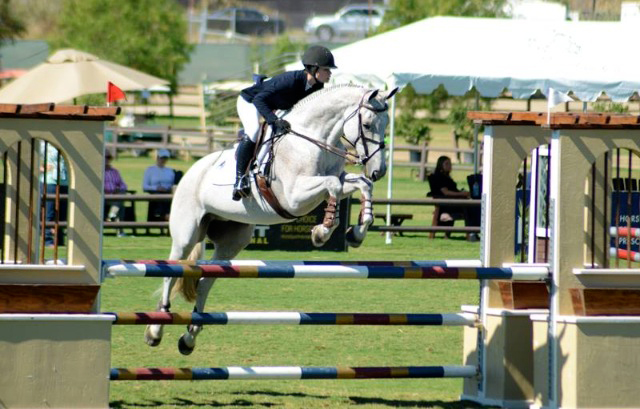 Today fashion dictates, as you see, that riders use the long and, sometimes exaggerated, super-long crest release.  Equitation four decades ago and earlier depict Maclay and Medal winners almost always following the mouth. These days one primarily sees some form of crest release, mostly short, however the last three years we are starting to see more independence. Nice! In fact, some judges in the equitation ring are starting to reward riders, especially in tie-breaker situations, who demonstrate independence of seat from hands and beautiful soft following arms. 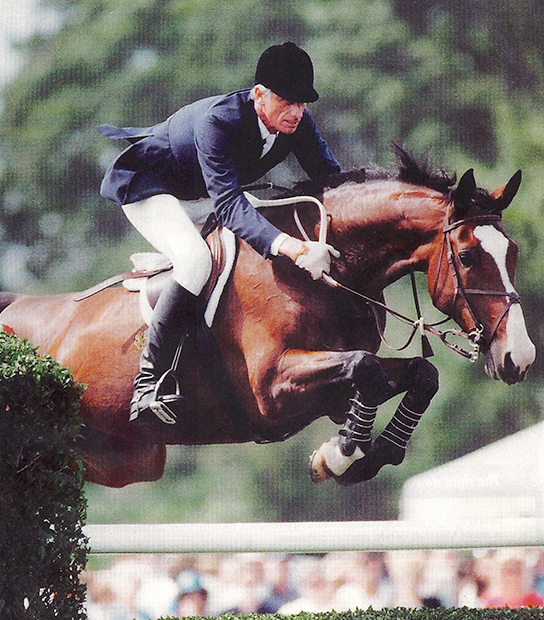 Jumpers are all over the map today.  We don’t see the arms of Joe Fargis and Ann Kursinski from the last century, in a classical straight line so much any more. But we do see many today with independence, not relying on the neck, and with a somewhat broken line from the elbow to the bit. Many will say the straight line from elbow to mouth may offer the perfect connection and in some cases this may be correct. However a rider with a slightly broken line that is independent of the neck certainly falls into the category of acceptable. 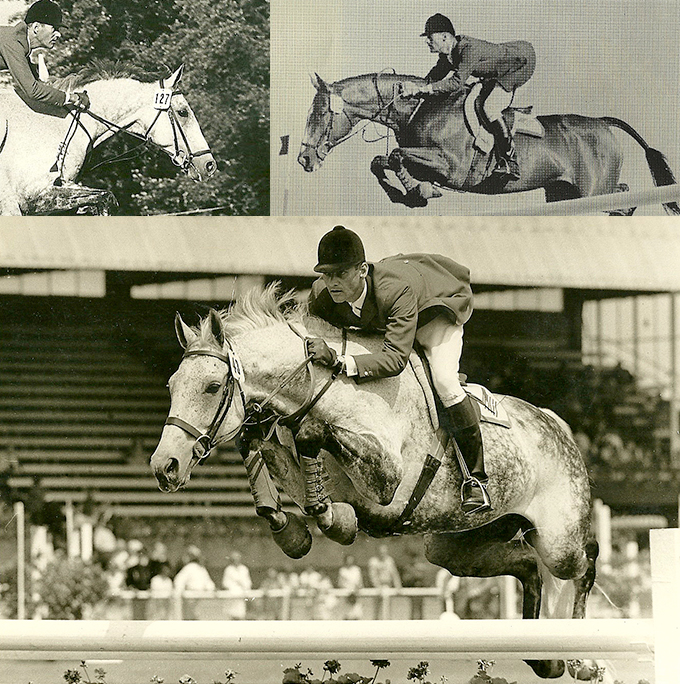 I always use Bill Steinkraus as an example. To me he is the epitome of perfect form. You probably cannot find a photo of Bill that isn’t perfect or close to perfect. If you look at his line, elbow to bit, you will see it straight, slightly broken, sometimes more than slightly broken, but most always with a connection to the mouth without reliance on the neck for support of his upper body. 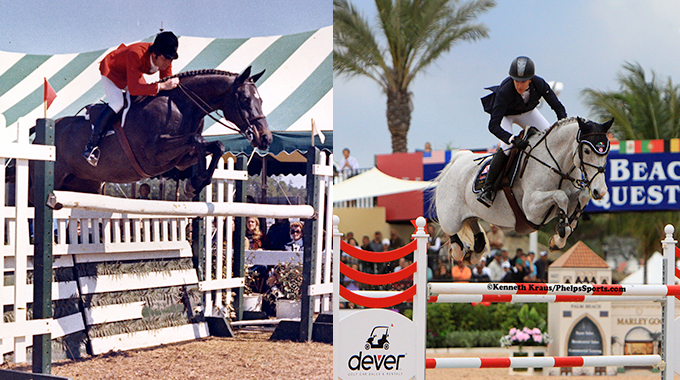 Bernie on Gozzi (left) and Laura Kraut on Cedric (right)

For me, it’s more about the independence from the neck and the connection with the mouth than about the line, as demonstrated today by so many of the top jumper riders. I teach practicing in a straight line as it’s harder, but don’t insist on it in the ring. A rider should be able to master and utilize any release he chooses at any given moment and in the different disciplines he competes in. I love a short crest release in the hunter ring. A following arm in the advanced equitation ring and in the jumper ring I preach connection with the mouth. 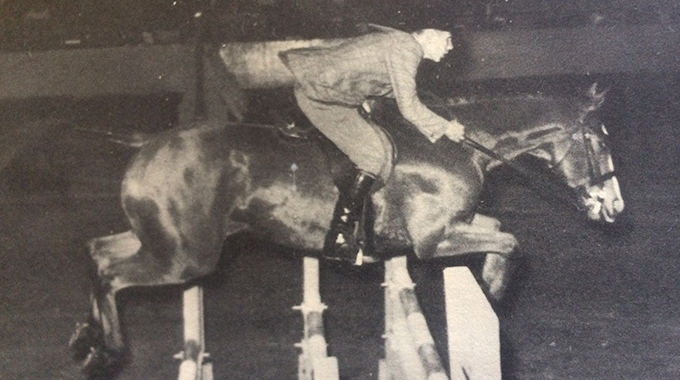 The following arm is not “old-fashioned.” Watch the video tutorials on EquestrianCoach.com and lets encourage the resurgence of a lost art!

For some great topics pertaining to all the releases and the following arm, please check out these videos:

What Release is Best for Equitation Medal Classes?

Peter Wylde shares his thoughts on what releases are best for equitation riders moving up the ranks into the medal classes.

To celebrate our 10th Anniversary, Bernie has put together a list of just some of his favorites over the years.

Bernie gives a member advice who struggles, because of his conformation, to keep both weight in his stirrups and contact with his horse's sides.
This Post Has 5 Comments