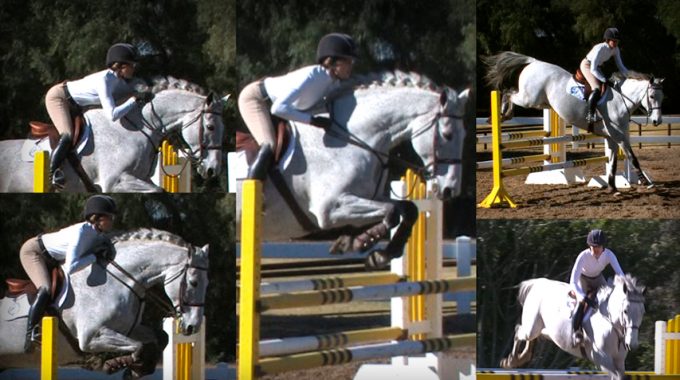 I have a question about releases.  I was always under the assumption that for non-rated, lower level equitation and hunter classes it was appropriate to do a mane/crest release about halfway up the neck. Even if riders were good enough to do a short release or an automatic release, it would be frowned upon because it would be inappropriate for the level.  When the rider is around the 2’6 level, I have them start doing the shorter release at home, but still showing with the crest/mane release halfway up.  I only have them start jumping with automatic releases in the jumper classes (if they are good enough to do so) or over 3 foot where appropriate.  Could you please tell me if this is congruent with your thoughts on releases, and if different, could you please explain?

I agree with you concerning releases. In my own words, at the lower levels, I think the long crest release is appropriate. I think the long crest release with mane is probably more of an exercise for use at home in lessons than for the show ring, although at the very lowest levels I guess it would be considered appropriate. Being a dinosaur, it is my belief that if they are needing to use the mane for their release, they are not yet ready to be horse showing. I don’t think that either the short release, or the automatic release are appropriate until a much higher level. These are for advanced work, in my opinion, and require a rider with very solid basics before they should be incorporated in any type of course work. The intermediary release between the long crest release (halfway up the neck) and the true short release or automatic release, would be the short crest release. This is the same as the long crest release (riders weight on the hands resting on the neck of the horse), except not as far up the neck. Hope this makes sense.

An Exercise To Perfect The Automatic Release
Bernie Traurig
A great way to get off the neck for balance and move from the crest release to connection with the mouth, or the “Automatic Release.”
Running Time:  12 minutes and 7 seconds

The Progression of Releases
Karen Healey
Karen Healey and her demonstration riders present the various releases used in the jumping disciplines. Karen shows us what releases are suitable at the different stages in a rider’s development, from a beginner “reach up and grab mane” release to the most advanced following hand or automatic release. She discusses the advantages certain releases have and some common faults rider’s can make when incorrectly used.
Running Time: 22 minutes and 55 seconds

Teaching the Automatic Release – The Hagman Formula, Part 1
Jim Hagman
The automatic release is an essential skill in every good rider’s toolbox. The use of it promotes a soft elastic connection with the mouth that follows the horse’s neck (bascule) over a jump. Additionally, the automatic release or following arms, illustrates the independence of the rider’s seat and legs. In this topic Jim Hagman, founder and head coach of Elvenstar (one of the West Coast’s most successful show stables), presents his formula for introducing and perfecting this, the most advanced release. Joining Jim as demonstrator is his superstar student, Sydney Hutchins, whose mastery of the automatic release was evident recently during her two giant wins – the 2014 Platinum Performance/USEF Show Jumping Talent Search Finals West and the 2014 ASPCA Maclay Regionals West!
Running Time:  6 minutes and 37 seconds

Have Something You Want to Ask Our Panel of Experts?

Ask The Experts is the ultimate way to get help from the top professionals in the equestrian industry without leaving the comfort of your home. This service is available to Monthly, Annual and Lifetime Members of EquestrianCoach.com.

Geoff Teall is one of the leading Hunter and Hunt Seat Equitation trainers in the country. Horses and riders who have trained with Geoff have gone on to win championships, medals and ribbons at major events including Devon, the AHSA Medal Finals, the ASPCA Maclay Finals, the Capital Challenge, the Pennsylvania National, the Washington International, the USET Talent Search, and the National Horse Show. Geoff is an "R" judge for both Hunters and Hunt Seat Equitation. In addition to training and judging he also offers his expert coaching through virtual training. To learn more from Geoff Teall Virtual Training on Facebook and Instagram.

Liability for Injury Due to a Loose Horse

Equine Law expert Lisa Hollister, Esq sheds light on liability issues if a horse gets loose on a road and causes injury or death of a person and damage to a vehicle.

Bernie gives a member advice to help her Thoroughbred who has a quirky mouth and gets hot as soon as she adds rails or jumps to their ride.

Karen Healey gives insight on why horses get flat in the canter and tips on how to overcome this common issue.